The life and times of a spring turkey

Dominance, power struggles, and new beginnings are all part of the season

Dominance, pecking order, and the breeding cycle are all factors affecting flocks for both sexes of a turkey population. This week we’ll look into the life of a spring turkey and where to find them.

Daylight saving time is upon Washington and with daylight gaining time, so too progresses breeding behavior in turkeys. The large wintering flocks will begin what is known as “the break-up,” where male and female turkeys designate pecking order and separate into smaller groups.

Love to watch them strut

Male turkeys, or toms, will begin strutting and gobbling during the onset of spring, both traits of the breeding ritual. They show off their plumage and brightly colored red, white, and blue heads to secure their place within the hierarchy of the flock. Spring also brings on fighting between competing toms as many turkeys will cross into neighboring flock areas in search of hens to breed. In addition, dominant hens will squabble and push other hens away for the best nesting areas.

During March and early April, hens have chosen their preferred nesting areas, which consist of secluded cover areas with depressions where they can scratch out a nest in the debris. Once nests are prepared, they will signal to a nearby tom by vocalizations and crouching down, showing they are ready to breed.

Vocalizations from both sexes increase wildly during this phase and for would-be hunters, this is a time to scout by listening for gobbles from toms and yelps from hens. Toms will spend time along field edges and openings displaying their wares in hopes of attracting a nearby hen or two. In the turkey world, the courtship ritual is centered on females moving toward the males which is opposite, in general, to how it’s done in the big game arena. One item to remember is that cold or hot spells can delay or increase this timeline in a given area by days or even weeks.

It’s also a great time to locate roosting trees, which are typically mature trees with an open limb structure that is easy for these large birds to fly up and land in. A roost tree is typically situated where the morning fly-down is an easy pitch to an open area. The base of a roost tree will be littered all around with turkey droppings, a tell-tale sign that a flock of turkeys spent nighttime hours perched above.

Locating a roost tree can often be simplified by process of elimination. Considering several factors will cut scouting time down. Proximity to water in some areas is the number one factor. However, in Washington, finding water is rarely an issue, so locating large stands of conifers with an open field or strutting area nearby is perfect. Combining this with a hillside out of the wind to provide more shelter is key.

As the progression toward opening day of turkey season carries on, scouting tactics must also evolve. Hunters can use the information above to their favor and can also benefit from focusing on food sources. Turkeys are known to consume a wide variety of foods, from insects to vegetation, and are opportunistic around farm crops.

Fortunately, today’s hunters don’t need to leave their homes to locate these areas to begin scouting. Several online mapping tools can be used to focus in on this specific type of topography and tree cover preferred by turkeys. Once a few of the areas are located online, hunters can identify landowners to contact or public lands where they can take a firsthand look at the habitat. Be in the woods in the early mornings hours and evenings to listen for chatty flocks as they fly down in the morning and move toward their evening roosts.

A year in the life of a wild turkey. (NWTF)

Walk dry, dusty roads looking for dusting locations, tracks, and the lines in the dirt created by wing tips dragging as a tom struts.

Both toms and hens often make calls prior to flying up to or down from a roost tree. If no vocalizations or the sound of large flapping wings are heard, then hunters can scout the areas on foot. Look for turkey droppings, feathers, or scratches where feeding turkeys have recently been. Walk dry, dusty roads looking for dusting locations, tracks, and the lines in the dirt created by wing tips dragging as a tom struts. These are great spots to set up a blind and wait patiently during the late morning to mid-day hours.

Using these tips will really help pinpoint the areas where spring turkey hunters can be successful. Now that we’re in this fabulous time of year, remember to purchase your license and turkey tags. Hunters can purchase up to three turkey tags during the spring season, but only two can be used in Eastern Washington (except three can be used in Spokane County) and only one on the west side of the state (except two can be used in Klickitat County). Refer to the 2022 Spring Season Wild Turkey Hunting Regulation Pamphlet for more information. 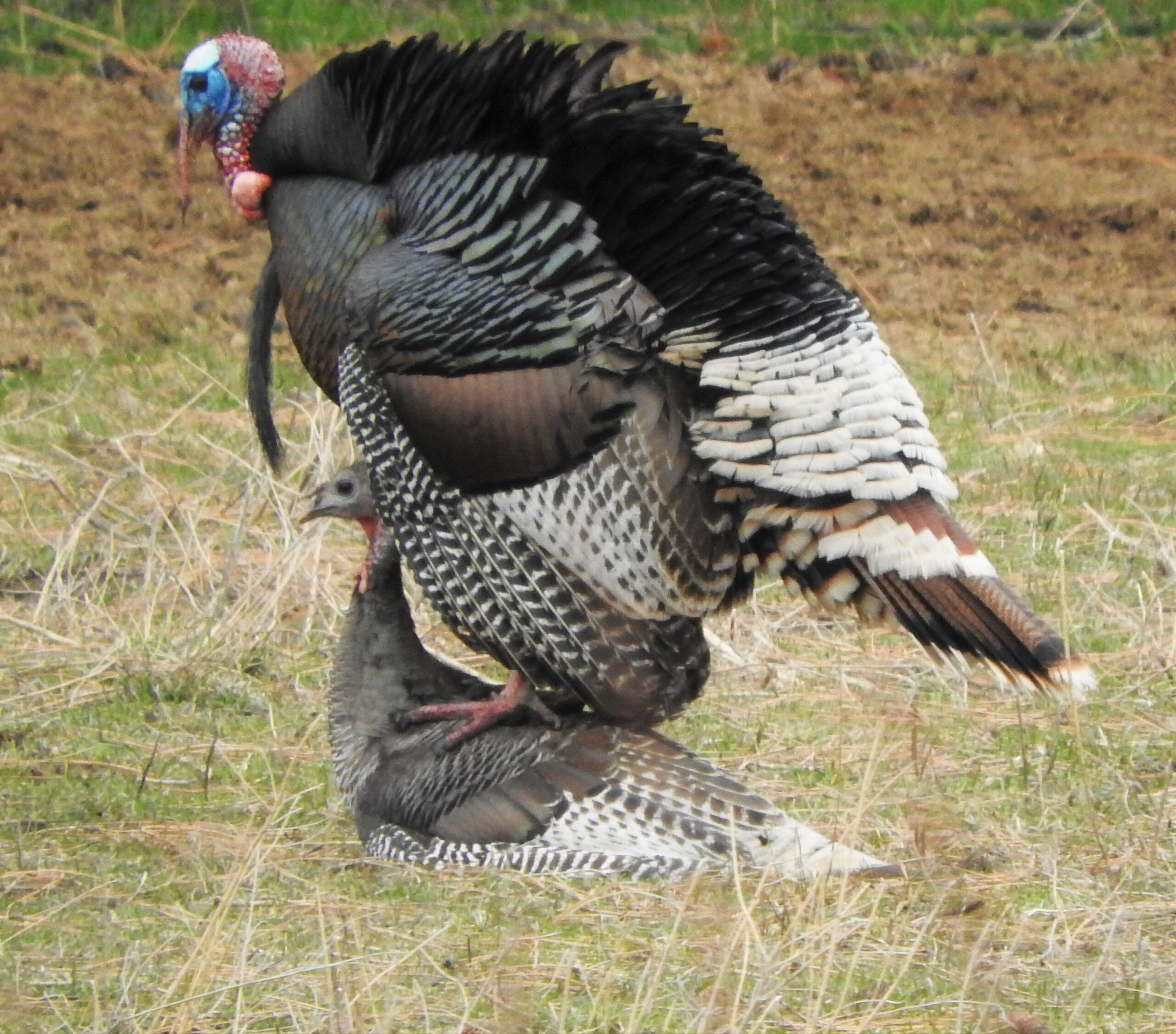