Let’s talk turkey! Washington state has a robust population of wild turkeys, ranging from the northeast corner of the state, to the southeast, and angling west toward the mouth of the mighty Columbia River.

We wanted to dedicate some time over the next several weeks to put a focus on wild turkeys in Washington in order to help educate new hunters well ahead of the spring season opener on April 15.

Wild turkeys were introduced into Washington around the early 1900s. A second attempt was made in 1960, when the first wild-trapped turkeys were introduced into the state from Arizona, New Mexico, and Wyoming. Since then, turkeys have maintained naturally reproducing populations in much of Eastern and Southwestern Washington. Currently, three of the five subspecies of wild turkey (Merriam’s, Rio Grande, and eastern) can be found in Washington with some Merriam’s/Rio Grande crosses likely in some areas of Eastern Washington (WDFW publications, November 2005).

So, how many wild turkeys are there? WDFW Region 1 (Spokane, Lincoln, and Whitman counties) Wildlife Conflict Specialist Kile Westerman says wild turkey populations are “healthy and thriving” in his district. WDFW relies on annual turkey hunter harvest reports to provide an index to turkey population trends. These reports show increasing hunter success rates over the past several years, indicating that statewide turkey abundance is likely increasing as well.

Wild turkeys reside in flocks, which during the winter months can grow as large as 300-500 birds! As you can imagine, this can create conflicts between turkeys and landowners who experience crop damage or other issues caused by turkeys. WDFW’s conflict specialists are local biologists who work with the public to help alleviate problems with specific wildlife species.

“There is no magic bullet to solve many wildlife conflict issues, especially when it comes to wild turkeys. The best plan of action is to remove food sources (like bird feeders) and/or exclude turkeys and other wildlife from livestock feed when turkeys show up, allow turkey hunting where applicable, harass when appropriate, deploy scare devices, and do as many of these as possible to be more effective,” Westerman added.

However, it is clear based on WDFW harvest reports and several news articles (The Spokesman-Review Oct. 20, 2019; Realtree.com; The Columbian, April 18, 2018) describing the populations of wild turkeys in Washington state that the bird is popular in both species numbers and with hunters.

Hunting is a key part of WDFW’s management strategy. In fact, interest in spring turkey hunting has been climbing steadily. In 1984, an estimated 689 hunters took to the field hoping to tag a gobbler. Two decades later in 2004, the popular hunt turned out 15,000 hunters. Based on the 2019 Field Harvest Reports, the estimated number of turkey hunters was over 11,300 in the spring and 4,800 in the fall with an estimated harvest of over 8,900 mixed subspecies turkeys. Most Washington turkeys occur in the eastern part of the state, though limited turkey populations can be found west of the Cascades as well.

Washington’s spring turkey season begins with a special early season for youth hunters. Youth license holders can hunt during a special youth-only spring turkey season on April 3-4, 2021. The youth season is open statewide and youth hunters must be accompanied by an adult 18 years or older. Standard hunting methods and all other turkey hunting regulations apply to the youth season.

Statewide general season dates run from April 15 through May 31. You can harvest three turkeys during the spring season, depending on location, with additional harvest opportunity during the fall season. For all the details, see the 2021 Spring Season Wild Turkey and Black Bear Hunting Regulation Pamphlet.

As you can see from harvest data, wild turkeys can be found in many parts of the state, though populations are most robust in Eastern Washington. And because turkeys don’t confine themselves to a map’s delineation, they may be found in areas not represented by these data. 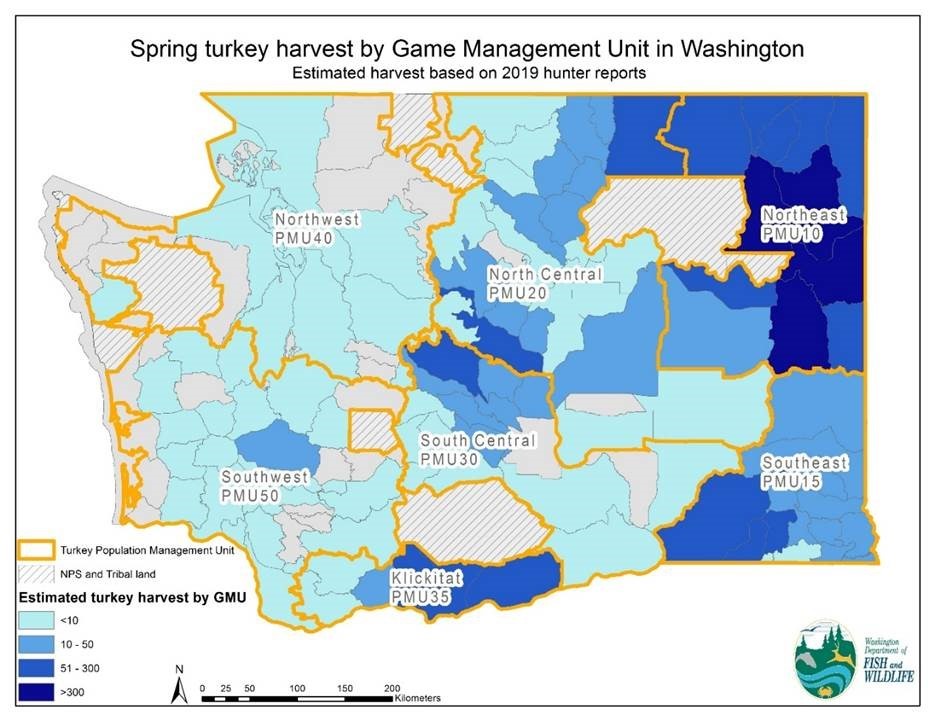 We hope this first post will pique your interest in wild turkey hunting. You can utilize this information to begin researching possible hunting areas this spring. Be sure to check back regularly for more information. Future posts will cover a variety of topics from turkey behavior, hunting strategies, and shotguns and loads to turkey hunting gear and plenty of tips and tricks from WDFW staff who are avid turkey hunters eager to help you find success!