Tips and tactics for deer and elk this month

Big game seasons are in full swing, so we wanted to offer some month-by-month tips and good-to-knows as you plan the rest of your fall season. Starting this series with a focus on October, we’ll examine our three deer species and elk to help you tailor your fall tactics and hopefully help you notch a tag or two.

Sept. 22 marked the autumn equinox again this year, which is the official kick-off to fall. As the length of daylight gets shorter, testosterone levels change in big game animals, which triggers their urge to reproduce. As bucks and bulls become more focused on breeding, this can create opportunities for hunters. Tactics such as calling (making vocalizations), rattling antlers (emulating two males sparring or fighting), raking trees (making antler rubs), and even the use of decoys can be very effective for those who employ them.

Before we jump in, be sure to check out the 2021 Statewide Hunting Prospects. Washington state is divided up into six major regions with 17 smaller wildlife districts.

“Our district wildlife biologists write these popular reports to give an in-depth look at what field conditions should look like this year,” said Anis Aoude, WDFW game division manager. “These prospects have a lot of useful information that can help brand new and experienced hunters plan their season and take note of new hunting rules established during the 2021 season setting process.”

Mule deer inhabit a broad range of habitats, from high alpine bowls to lowland sagebrush flats. Regardless of where you pursue mule deer, one thing remains constant: They need water. Keying in on summering water sources in October can be a great tactic, if you have the patience to wait out a buck.

Other proven tactics include glassing from a vantage point to locate feeding deer at first and last light, as well as bedded deer during the heat of the day. Bucks will often seek the shade of a lone pine on a hillside or the shade side of boulders and rock outcroppings.

The same can be said for the sage country down low. Coulees, ditches, and other terrain features can provide great security cover and shade for bucks during the heat of the day. Time behind quality optics is a good investment. Let your eyes do the walking and save your energy for closing the distance to your target. Pick apart shaded areas and look for small movements, such as the flick of an ear or the quick head shake as bucks shoo pesky insects.

Remember to consider the thermal currents when planning your stalk. Cold air sinks and warm air rises. Deer rely on these thermal currents to detect danger and will select bedding locations accordingly. Often, it’s better to wait for consistent thermals/wind so you can use it to your advantage.

These young mule deer bucks are engaged in some light sparring to sort out the pecking order. This important social behavior among bucks helps establish dominance and breeding rights within a particular area.

As bucks shed their summer velvet around the first of September, black-tailed bucks — like all deer — begin to sort out the pecking order within their home range. They also become mostly nocturnal, so if you’re wondering where all those summer velvet bucks went, they didn’t leave the area, they just changed their behavior.

By mid-October, older bucks become more solitary and will create rubs throughout their domain. Rubs are a complex topic but it’s important to know that they use them to communicate with other deer, including does. They rub gland secretions on them which share age and social status.

The last week of October is arguably one of the best times to see a mature black-tailed buck during legal shooting light. Bucks are in the pre-rut phase of the breeding ritual, which means they are seeking out receptive does to breed. Some early breeding can occur, but the peak breeding phase occurs around mid-November. Still, this testosterone-filled frenzy of buck activity can provide all-day sightings of deer just about anywhere. They will scent-check doe bedding areas, trail systems, and otherwise monitor the receptivity of does.

Notable hunting tactics include setting up on edges of clear-cuts and/or glassing for active deer. Again, bucks will be more active as Halloween approaches. A well-placed treestand or ground blind along trail intersections is also a good bet. Be sure to play the wind carefully with these set-ups. Calling deer using doe bleat calls and rattling antlers can be very effective in late October as well. Typically, these tactics produce younger bucks, but not always. You never know until you give it a try. 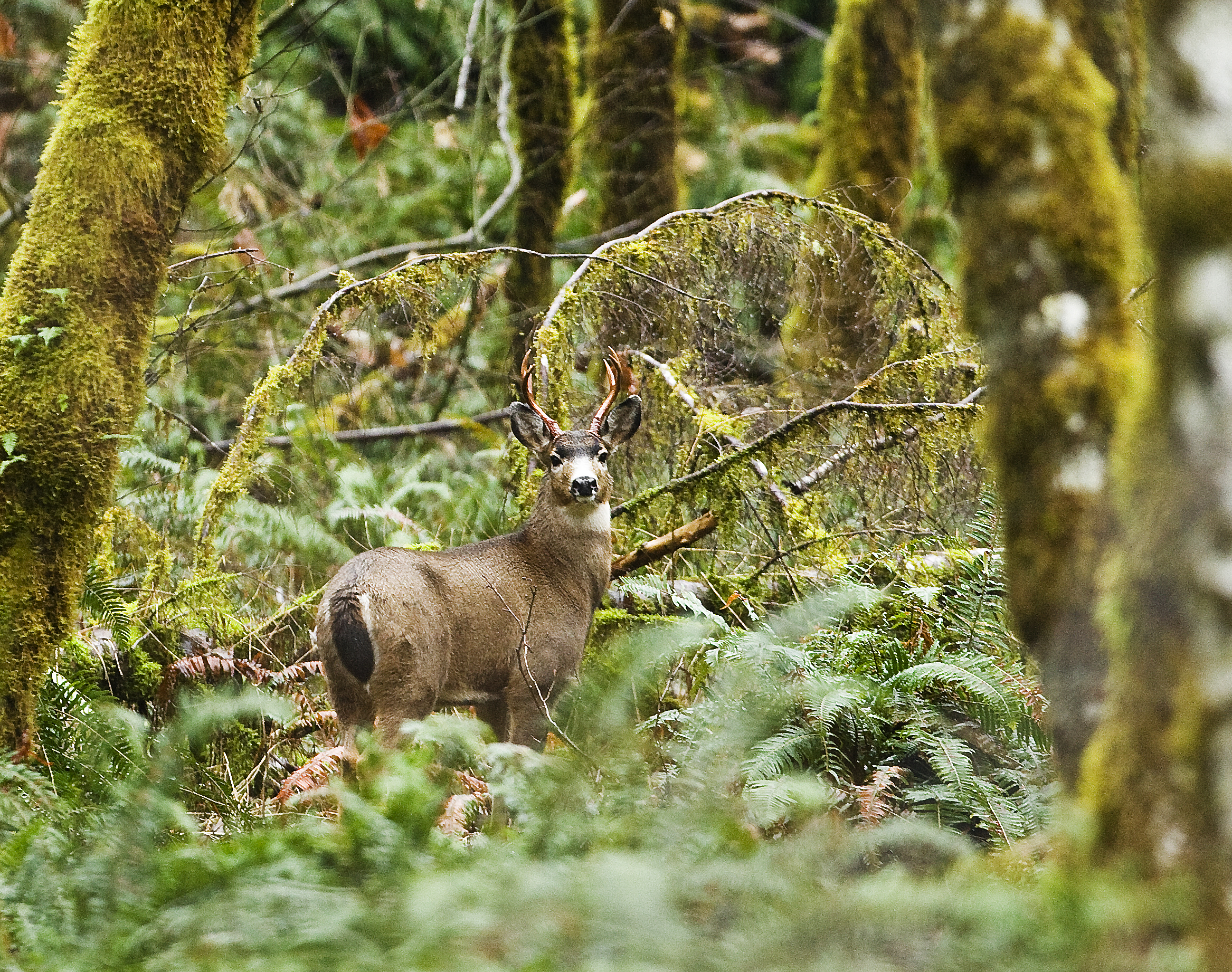 Notoriously nocturnal, blacktail bucks spend more time moving during legal shooting hours as they seek out does in anticipation of the breeding ritual, also known as the rut.

White-tailed deer inhabit the eastern side of the state and can be found in a variety of habitats from agricultural fields to rugged pine forests. Similar to black-tailed deer, they are adaptable and can thrive in many areas that provide food, water, and cover to evade predators.

Unlike black-tailed deer, white-tailed deer are notoriously patternable, which means they are creatures of habit and routine within their home ranges. Hunters have long taken advantage of this trait by watching deer from a distance and then moving in to set up when conditions are right.

In general, white-tailed deer tend to be more paranoid about potential danger and therefore less curious than both black-tailed and mule deer. In fact, they exhibit a nervousness that has no doubt helped them adapt, survive, and thrive.

In the white-tailed deer hunting community, there is a phenomenon called the “October lull,” which is well-covered in other writings. In short, this lull translates to low deer sightings during the bulk of the month, leaving hunters scratching their heads wondering where all the deer went. Again, they didn’t leave, they changed behavior patterns. 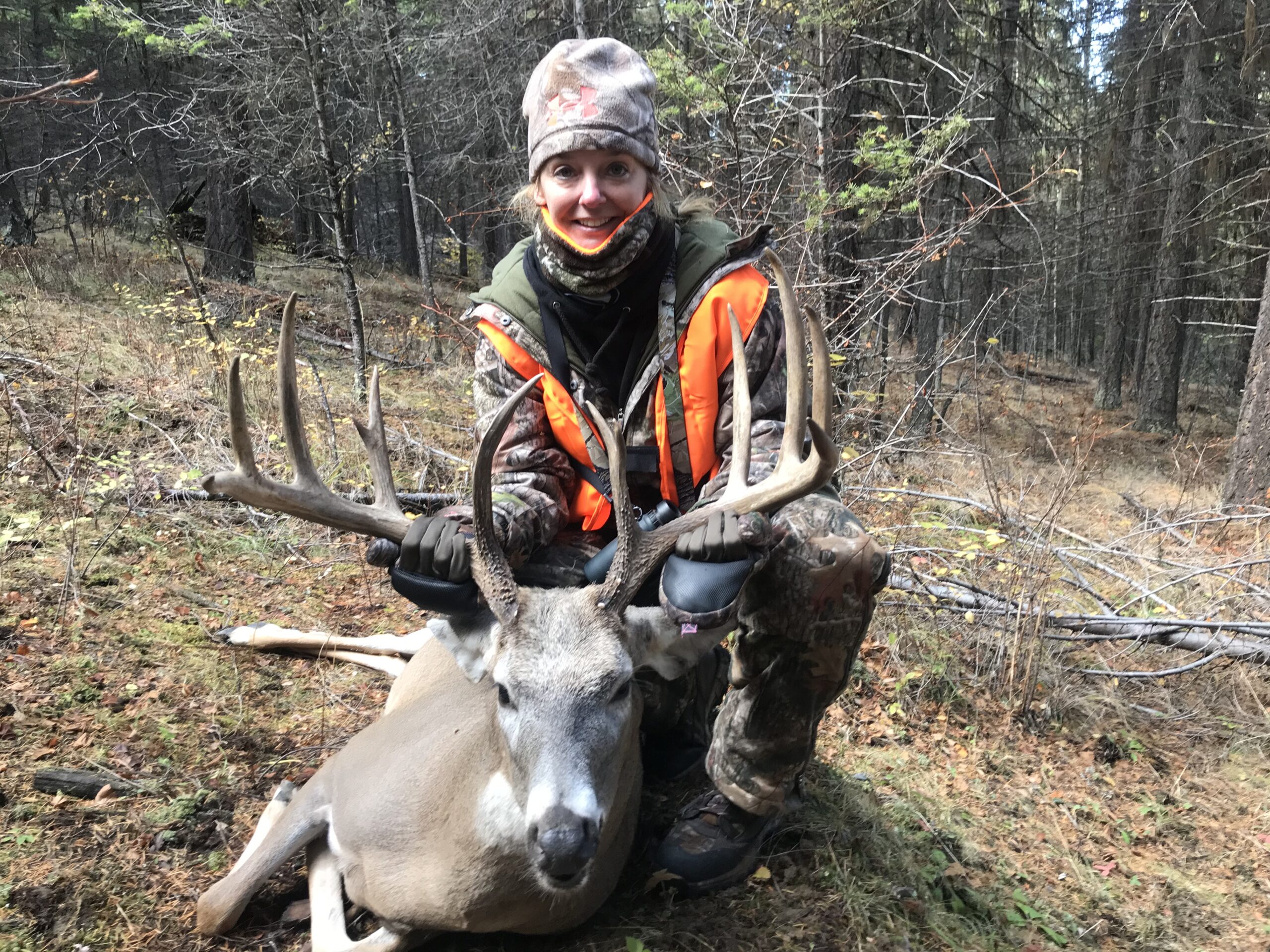 Here are a few tactics you might try. Hang a few trail cameras off the beaten path. Push into that thicket you’ve always wondered about and see what you can learn. Map out does where you see them and use aerial imagery to guess where they might bed, feed, and water. Locating trails between these key hangouts can lead to great stand locations. Another consideration is hunting the way-too-obvious spots most hunters purposely avoid or overlook. This is an often underutilized tactic that can pay big. White-tailed deer are crafty and adept at hiding right under your nose.

With recent CWD cases appearing less than 200 miles away in Libby, Mont., WDFW is conducting a surveillance program during the 2021 deer hunting season. You can get all the information on the updated CWD webpage, including information on getting your harvested or roadkill-salvaged deer tested.

Epizootic hemorrhagic disease (EHD) and bluetongue cases have spiked this year, which may result in whitetail numbers being down this year. The department has monitored these ailments for decades and the cases always increase during drought years.

Before we dive in here, it bears noting that these tips apply to both Rocky Mountain elk and Roosevelt elk. While there are subtleties pertaining to habitat and herd dynamics, etc., for our purposes we will lump the two subspecies together.

Elk begin their breeding ritual in September, often peaking around Sept. 20 (it varies) but lasting well into October if there are receptive cows to breed. Muzzleloader hunters would be smart to utilize cow and calf calls during their early season, and don’t be afraid to bust out the bugle tube to locate a love-sick bull. Keep in mind that pleading calf calls can work well on October elk but these sounds can also trigger a black bear or cougar to key in on your location. For safety, consider setting up with a large tree or other obstruction at your back.

If calling isn’t your game, you can still approach October elk with focus on their breeding habits. Key in on big timber units and benches above clear-cuts. After daylight, they will move from feeding to these bedding areas where they will spend much of the day if undisturbed. Monitor trail crossings along logging roads for fresh activity and direction of travel. Cut a fresh trail with hooves pointing uphill and you’ve got a good shot at sneaking into a bedding area. If the wind isn’t cooperating, you can plan a route to circle around from above. 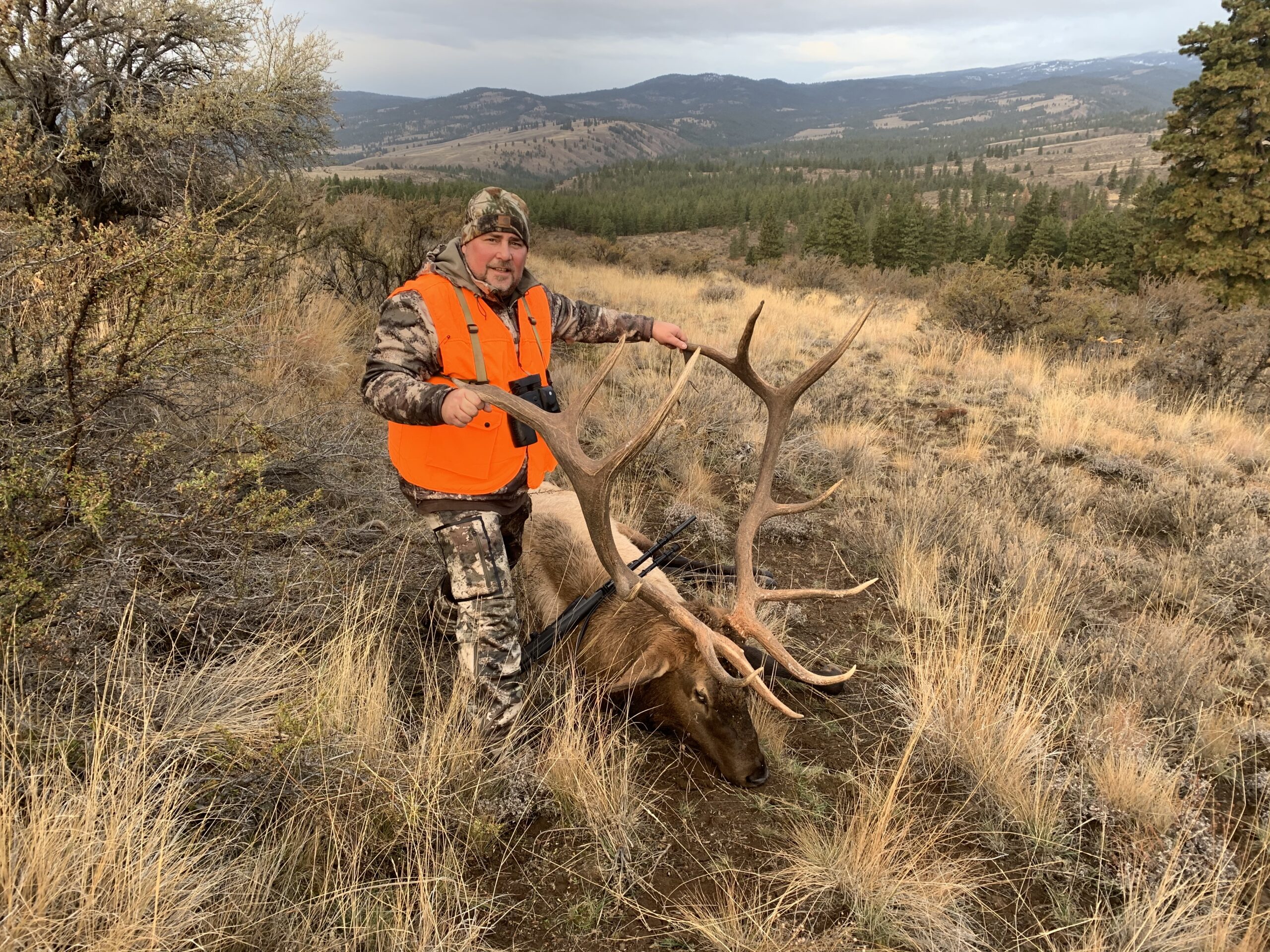 Christopher Wright had this to say about his first-ever elk: “After 5 weeks of hard work, miles and miles of hiking, and multiple hours of scouting one particular bull elk – all on WDFW land – I caught up with this 6X6 bull of a lifetime on opening day.”

Another good bet is focusing on field edges where timberlands drop into lush green valley floors. These are prime feed areas for elk, especially at night. While most all fields are private and may not provide access, you may be able to set up along trail systems up in the timber. Sitting trails is a good way to quietly intercept elk heading down for the evening to feed. Be sure to know your location and avoid trespassing on private lands.

Before you go: latest information on elk hoof disease and how you can help

Elk hoof disease — now known as treponeme-associated hoof disease (TAHD) — is being studied by WDFW and several of our partners, including Washington State University. You can review their detailed 2020 update to the state Legislature to learn more about this research and findings.

WDFW is offering a special drawing as an incentive for hunters to participate in ongoing research on TAHD.

We’ll be back with another installment for November. If you find these tips helpful or have other topics you’d like us to cover, please let us know by emailing [email protected]. Until then, be safe, enjoy every moment in the field, and good luck!