Putting the picture together for future success

The close of deer and elk seasons across the country is a time when many big game hunters trade their muck-caked boots for a pair of fleece-lined slippers. It’s a time to reflect on exciting moments, filled tags, and quality time afield with good friends and family. But don’t get too comfortable because the post-season is also the best time of the year to begin preparing for future success.

In this post, we’ll cover some basic approaches to post-season scouting for deer, elk, and black bear that will keep you active during lethargic winter months, improve your knowledge of the game you are pursuing, and increase your odds of notching a tag or two this coming fall.

The close of fall hunting seasons marked the onset of winter across the state. As hunters packed up and headed home, big game animals began preparing for the winter months ahead.

Generally, winter life revolves around food, security, and recovery from mating season for both deer and elk.

Elk reassemble into larger herds after being dispersed into smaller bands during the September breeding ritual, known as the rut. Migratory elk tend to follow the snowline down into their preferred winter range habitat to escape heavy snows and access better food sources. Lowland elk will meander through their home range seeking out the best grasses nearby bedding areas.

All species of deer in Washington — blacktails, whitetails, and mule deer — wrap up the rut by December. Depending on home ranges, some deer will migrate to lower elevations for winter. Lowland deer will remain in their home ranges, however they typically make a seasonal shift. So, where you see deer in the spring and summer will likely be different from their fall and winter haunts.

For hibernating bears, they have already entered or are seeking out their secluded den locations. It’s important to note that not all black bears in Washington will hibernate. It largely depends environmental conditions in their home range as well their overall health. Black bears in coastal areas may remain active throughout the winter, except for pregnant females, which den to give birth to cubs.

The goal at hand

The primary goal of post-season scouting is to learn more about your hunting areas and the animals that live there. If you limit your knowledge intake to the few days per year spent hunting, it will take many years to learn the many things needed to inform your hunting strategies. In my seminars I often say, “I hunt year-round, but I carry my bow only a few days per year.”

This approach has helped me greatly over the years as family, work, and other priorities limited the number of days I could hunt in any given year. My days afield decreased while my success rate increased.

Let’s dive in and cover a few post-season scouting tips for deer, elk, and bear that you can employ right now that will pay dividends when the leaves start to turn.

The key factor in turning your deer hunting dreams into reality is understanding deer movement and why/when deer travel. For our purposes here, let’s generalize a bit and consider deer movement patterns independent of a particular species, region, or habitat type. Deer will travel during the fall for three primary reasons: food/water, security (bedding areas), and reproduction. Of course, they use escape routes when reacting to human intrusion and predators.

Since bucks pursue does during the rut, they will seek out local doe groups to breed during the October and November hunting seasons. Knowing where the resident does live and their traditional travel routes between bedding and feeding areas is critically important to your stand locations in the fall. One of the benefits of the post-season is mapping out these travel routes when the leaves are down, grasses are withered, and visibility is much better. It’s like peeling away all the clutter so you can really see the lay of the land and better understand deer movement patterns.

Walk trails to discover intersections, natural pinch-points or funnels that concentrate deer activity. Also follow trails to locate fall bedding areas and likely feed areas. Also note fresh rubs from this past fall. Rubs tell you exactly where a buck was standing during the fall. Identifying these locations can pay big when the rut heats up in late October through mid-November. As does continue to go about their business in their home ranges, bucks will scent check these trails regularly. It’s a good idea to map as many trails as possible before the spring green-up engulfs them in foliage and grasses.

The key point here is that does seldom stray from their home turf and their established trail networks are powerful magnets for rutting bucks. This also can keep you from wasting precious time hunting areas void of deer activity.

When hunting migratory deer in more open terrain, the same condition is true, but you’ll have additional work to determine the primary migration routes and trail systems, and to key in on the south-facing slopes that provide warmth, less snow, and better food sources.

As mentioned, elk herds in higher elevations and those that inhabit the Cascade Range are migratory, meaning they move great distances between their summer/fall range and their wintering grounds. Understanding this is critically important to post-season scouting because your goal is not to find elk. Instead, your goal is to figure out where they were during the prior hunting season.

This is done by studying maps to discern likely migration routes into lower elevations that likely contain good feed. Remember, elk are primarily grazers, so they will gravitate toward lower-elevation fields, grasslands, and shrubsteppe habitats. Next, pack up some essentials and put in some time afield searching out established elk trails, old wallows (elk sized mud baths made by bulls during the mating season), rubs on trees, and bedding areas.

Also consider human access into your prospective hunting grounds. The easier it is to access, the more company you will have come hunting season. Consider less-accessible locations that require some extra effort if you want a more solitary hunting experience. 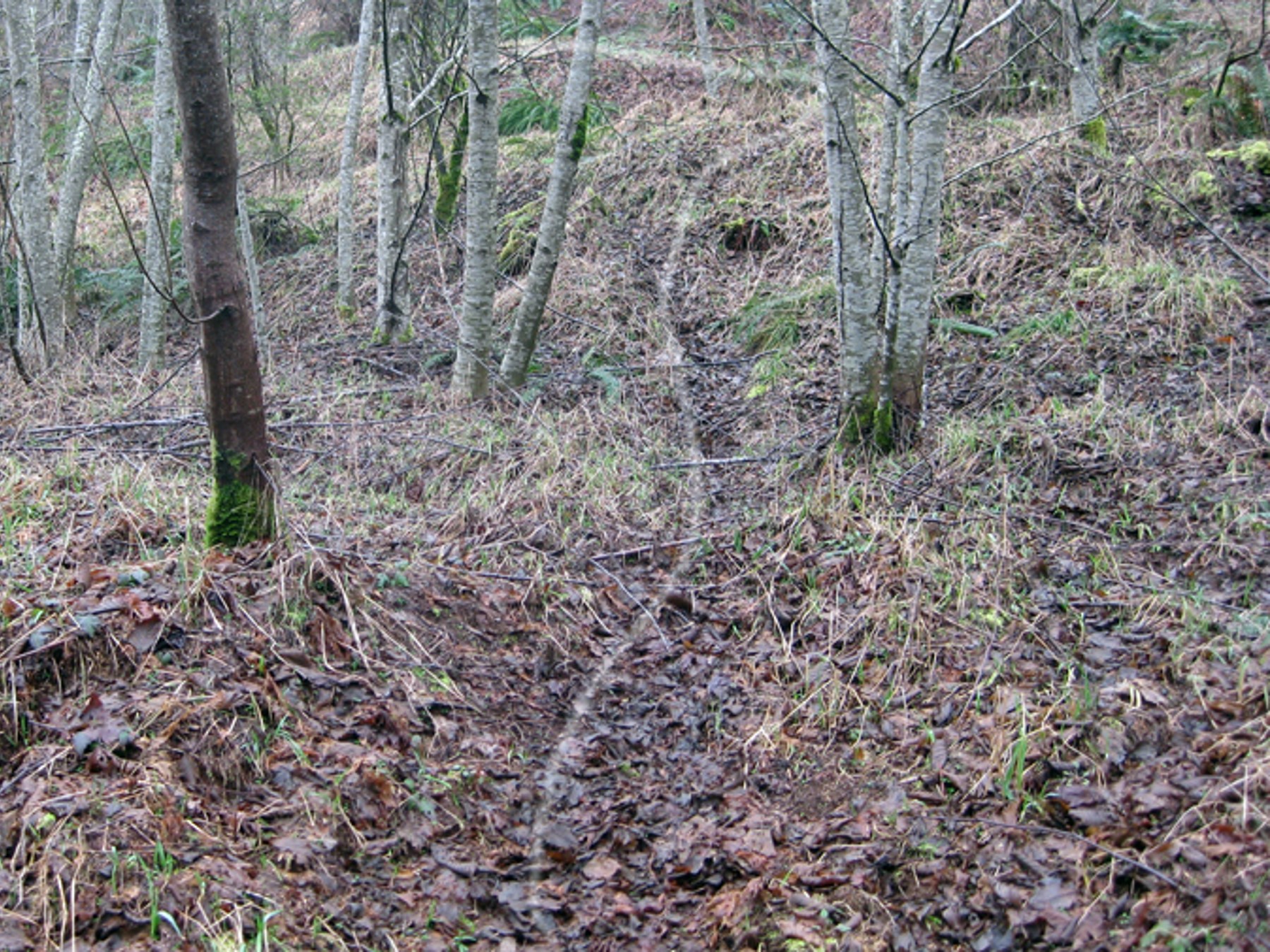 This resident doe trail (traced with a white line for clarity) is nearly invisible during the summer months. I found it during a post-season hike to learn more about a new hunting area. The following fall I put a trail camera on that tree to the left and captured several nice bucks searching for does. (Tom Ryle/WDFW) 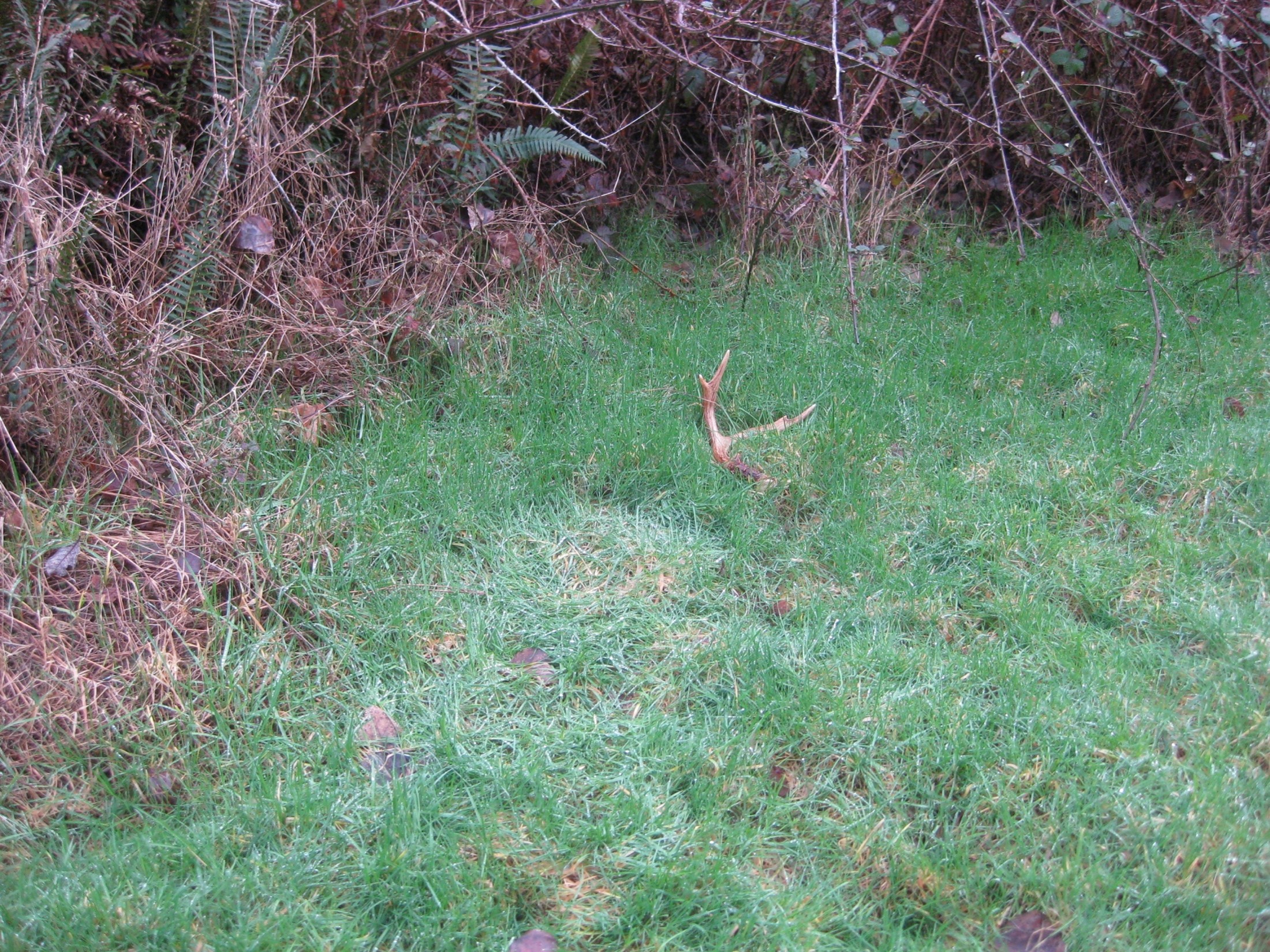 It is not uncommon for bucks to bed near feed areas in order to conserve energy. Sometimes you will find antlers in or near beds, which is always noteworthy. (Tom Ryle/WDFW) 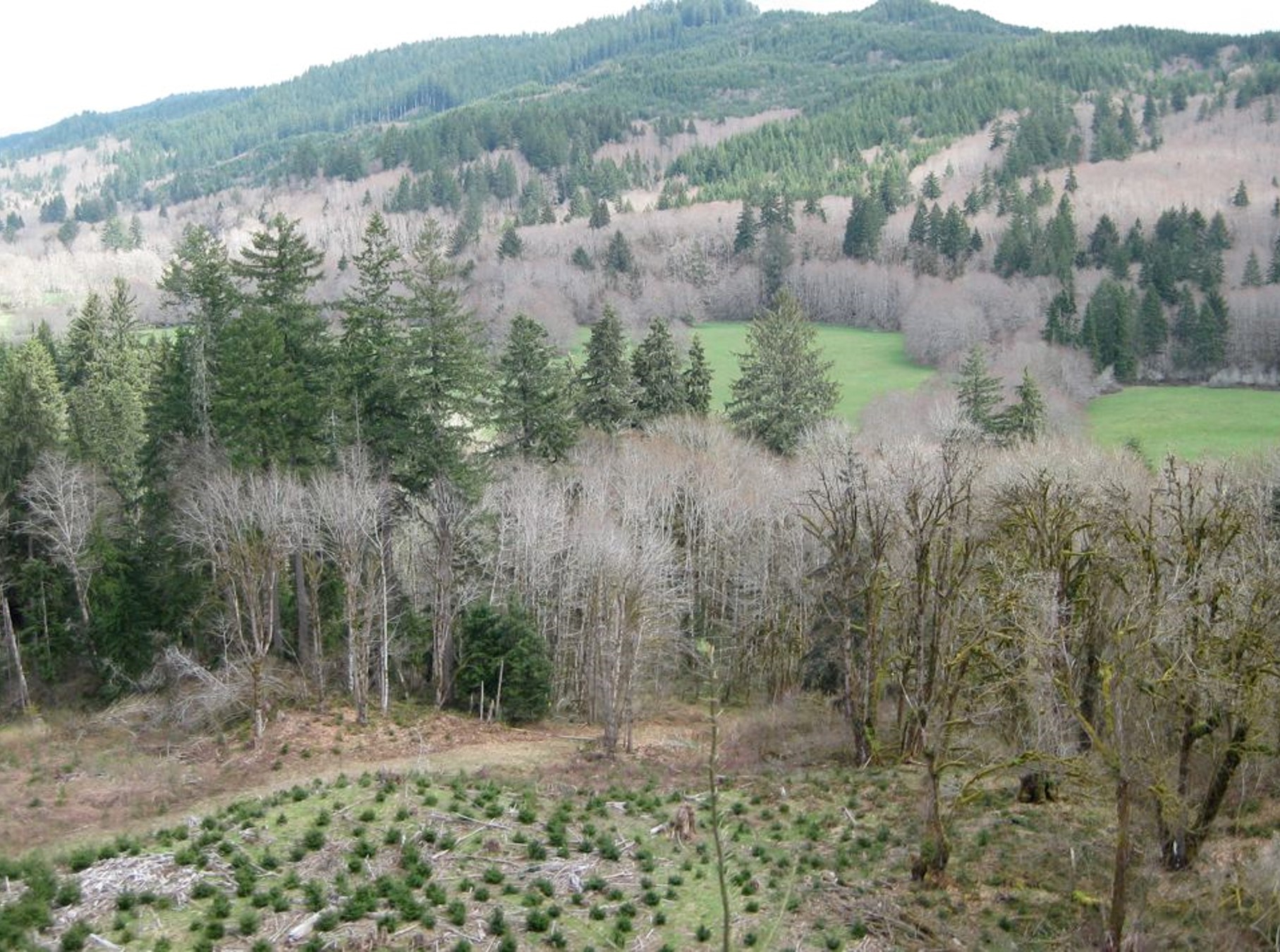 Elk are grazers and will gravitate toward lowland fields during the winter to access better feed. Local, non-migratory herds will remain active in these areas all year long. Migratory elk will return to their spring and summer range as the snow melts. (Tom Ryle/WDFW)

Post-season scouting for bears can be more difficult. Hibernating bears begin to emerge in the spring (timing will vary), with most bears out around the April timeframe. Lowland bears that may have been active all winter will be out and about seeking out the new vegetation starting to emerge.

Bears are omnivores that have relatively unspecialized digestive systems similar to those of carnivores. The primary difference is that bears have an elongated digestive tract, an adaptation that allows bears more efficient digestion of vegetation than other carnivores (Herrero, 1985). As such, black bears are opportunistic feeders with a diverse diet of vegetation, insects, rodents, berries, and predation of deer, elk calves, and even other bear cubs.

Bears have soft pads, so their tracks aren’t as easy to come by in the field. Detours to peek into swampy areas, muddy roadsides, or creekside banks can reveal tracks more readily. Paired with those soft pads are sharp, hooked claws that are efficient at tearing apart rotting logs and stumps in search of termites, ants, and yellow jacket nests. If you find these sites, take note that a bear is using the area.

Glassing open grassy hillsides can reveal areas where a bear has dug holes while pursing rodents, or a series of rocks that have been excavated in search of ants or other insects.

Collecting and cataloging your clues will help build intel over time. A small notebook is handy for this and/or you can consider digital mapping tools such as onXmaps or other offerings. These platforms are fantastic tools that allow you to build your own database of information and keep everything organized.

Bears will roam and routinely feed on termites and ants, which are found within rotting logs and stumps. Evidence of their feeding activity is easy to spot. They dig and tear away rotting material leaving holes the same size and shape as a bear’s snout. (Tom Ryle/WDFW)

This rock was rolled over in search of rodents or insects. Note the mole tunnel! (Tom Ryle/WDFW)

Antlers are fascinating! Each spring, antlered game grow a new set of antlers only to be cast from their heads several months later, typically December – April timeframe. Once the process starts, the abscission layer between the skull pedicle and antler base deteriorates quickly causing the antler to separate and fall to the ground. We will cover the science of antlers in more detail in another post. Mid-March is prime time for finding deer antlers, while elk will begin dropping antlers late March through April.

I’ll be the first to admit I’m a shed-antler fanatic. Each time I find an antler, a surge of energy rips through me as I frantically begin scanning the ground for the match. Unconsciously, my mind conjures up images of the buck on the hoof and what he was doing — and more importantly, why.

The significance of shed antlers is multi-faceted. First and most obvious, cast antlers reveal the size and age-class of bucks that survived beyond the close of most hunting seasons. This fact alone should be motivation enough to turn off TV and hit the woods. Secondly, the specific location where you find antlers provides insight into what that buck/bull was doing and where he was at that exact moment in time. For example, was the antler at the edge of a preferred food source or was it cast along a brush-choked trail leading into a bedding area, or on a wide open south-facing hillside? These special finds are telling you a story. If you listen carefully, you can come away with much more than another bone for the pile.

If you are finding old sheds in the same area you are finding fresh sheds, this tells you that bucks and/or bulls are wintering in this specific area for a reason. Your goal is to understand why. Most likely it’s an area that provides a key winter food source but there may be other reasons as well. Security cover, thermal cover during cold winters, and/or an easy place to hole up and conserve energy. Again, keep a notebook with you on your shed hunts and log as many relevant details as you can.

It’s important to note that migratory elk and deer are currently recuperating and conserving energy. Human intrusion into wintering areas can create undue stress on wildlife, which should be avoided. Be sure to review WDFW’s regulations and best practices before making your shed-hunting plans.

Armed with these tips, I encourage you to take the post-season opportunity to skip your own winter hibernation and head afield now in order to boost your odds of success in the coming big game seasons. 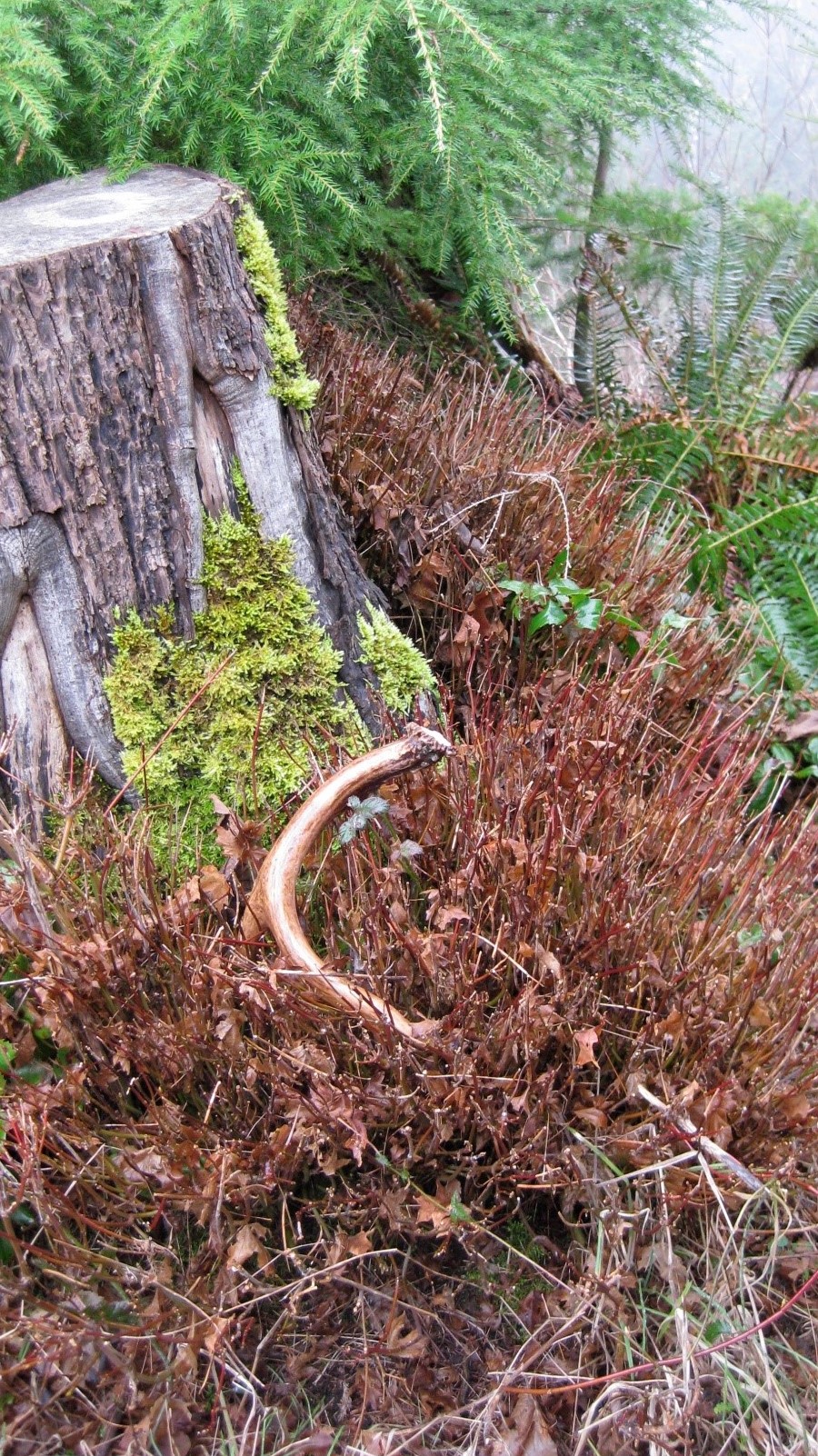 Focusing on winter food sources can lead you to finding more sheds. A black-tailed buck feeding on new growth from this maple stump left a clue behind. (Tom Ryle/WDFW)