Hit the woods for nature’s bounty this month and beyond

If you’re lucky enough to find yourself in the right spot in one of the damper areas of state this month, you might find that mushroom season is well underway with some of a forager’s favorites emerging from the moss.

Below you’ll find a starting point for working with some of the more common edible mushrooms you might find so that you can introduce them to your dinner table. Keep in mind that some of the mushrooms detailed here can fetch anywhere from $10-$45 per pound at the grocery store, so you can feel good about providing one of the finer things in life for your family courtesy of mother nature and a hike.

Since this is an introduction to mushroom hunting, a few words on safety are needed:

We’ll start with perhaps the most common edible mushroom you might encounter: the chanterelle. This delicious mushroom is usually yellow in color but can range from nearly tan to a light yellow/orange. It’s usually found in mature conifer forests, with a preference for Douglas fir. It can range in size from no bigger than your finger to a mushroom the size of your hand and usually has an irregular cap.

If conditions are right, it can be found as early as late summer and as late as early December, but autumn is really the high time.

It is set apart from many other mushrooms because it doesn’t have the gills found on the underside of the cap of some mushrooms.

Rather it has false gills that look like forked folds or wrinkles that run part way down the stem. The chanterelle’s main lookalike, the jack-o-lantern, has gills and will be found growing from wood where the chanterelle grows out of the forest floor. The jack-o-lantern can also be bioluminescent.

When you’ve brought some home, get as much debris off the mushrooms as you can (some prefer to bring a stiff brush into the woods to do this as they collect) and get a skillet ready. Like most mushrooms, you’ll want to remove the excess moisture from them to make them palatable before really cooking and seasoning. Put your sliced mushrooms in a hot skillet with a little salt and no oil and the moisture will “weep” out. Some people like to keep that stock that collects in the pan for flavoring soups, but once it mostly evaporates or is removed is when to hit the mushrooms with some butter, salt, pepper, garlic, and maybe some onion. The simple approach often works well with chanterelles and once cooked they can be added atop salmon, beef, or nearly any meat for a delicious meal. Other culinary options abound, from deep frying to pickling to adding them to a variety of dishes.

The hedgehog or sweet tooth has a cream-colored to tan or buff irregular cap with distinct “teeth” on the underside where many mushrooms have gills, hence the name. It’s also found on the floor of conifer forests in the fall, sometimes very close to patches of chanterelles.

This mushroom has firm, white flesh that is usually left alone by insects (a normal part of mushrooming is finding that some small insects have gotten into some of your haul but the hedgehog fares much better on this point than others).

If you bring home a cloth sack of these treasures, prepare them and pair them much the same way you would chanterelles. Their firm flesh make them stand above chanterelles to some aficionados. 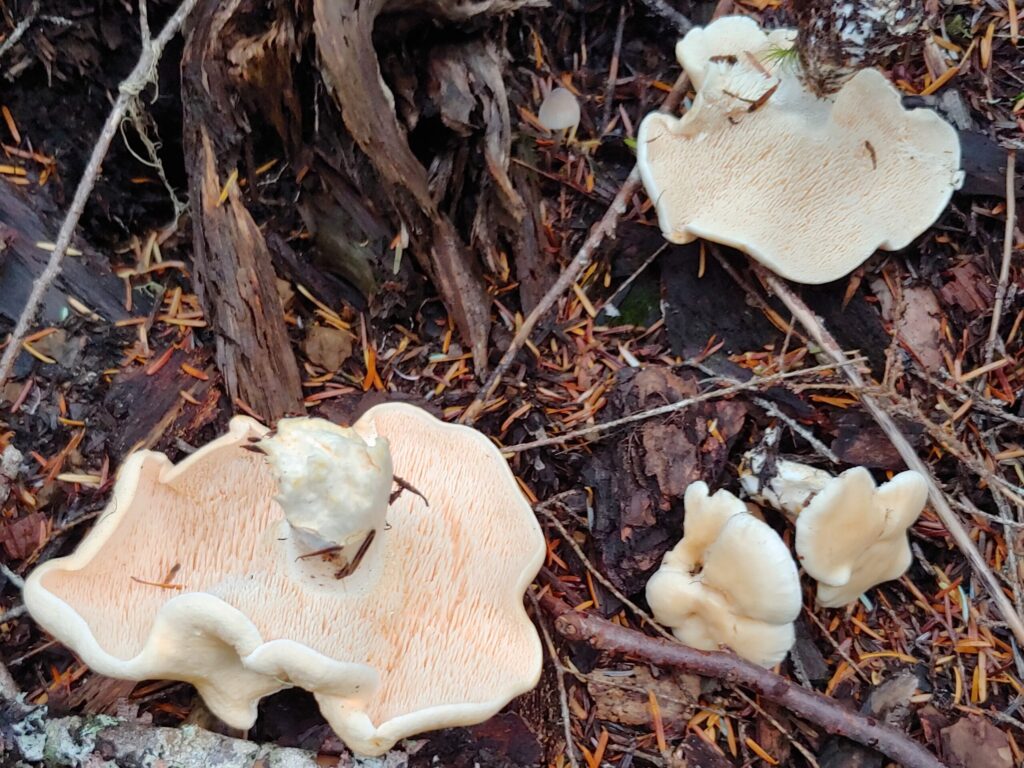 The lobster mushroom is a fascinating one among the edible mushrooms because it is actually a parasitic fungus attacking another fungus species, producing a remarkable result. The parasitic fungus attacks a species that is typically passed over by foragers, usually a russula species, and turns it into a firm, red-orange mushroom that has the look of a cooked lobster shell and can have a seafood scent.

Cleaning this mushroom can be a little more involved, but your best bet is to simply slice off dirt-caked or soft spots rather than wrestle with brushing off the sometimes significant amount of dirt and debris that can come with this treat.

Found on the floor of conifer forests, this low-growing mushroom also enjoys gravel soils and so can be found on the margins of forest roads. It’ll start popping up in late summer but can be found in the fall.

Once ready to cook, they come out of a cast iron skillet tasting great like chanterelles and hedgehogs, but unsurprisingly, there are many recipes out there for using this mushroom in place of lobster meat in a variety of dishes.

Chicken of the woods

Breaking away from the cap-and-stem kinds of edible mushrooms, we come to a striking bracket fungus called the chicken of the woods. This vividly colored mushroom stands out in the forest with its groupings of yellow, orange or red brackets with surprisingly bright yellow undersides. Its coloration earned it some other common names, including sulfur bracket for that blazing yellow color.

Found on decaying conifers, the chicken of the woods can be very prolific with one stump yielding several pounds of fresh mushrooms.

What’s better is that since they grow up off the forest floor, they’re often quite clean right at the time of harvest. This mushroom can be found starting in late summer but can hang on into the fall.

Some people do have an adverse reaction to chicken of the woods and odds of that are thought to increase with specimens growing on cedar stumps, but many people find no digestive difficulties no matter what tree it’s growing on.

In the kitchen, this mushroom is prepared in much the same way as chicken and is used as a replacement for poultry in vegetarian dishes or as a supplement to chicken in a variety of dishes.

The cauliflower mushroom is so named because of its large clumps of tan or off-white curly branches resembling leaves. The structure is reminiscent of cauliflower florets though others say it looks like a coral or even a brain.

Whatever you think it looks like, this mushroom can get big and is useful in the kitchen. It’s not unusual for the clumps of the mushroom found growing from decaying wood to reach 5 lbs or more. It is also known to sometimes grow from the same log or stump for more than one year.

When it comes to dinner, after breaking down, cleaning, and boiling the pieces of mushroom, the flesh resembles a firm egg noodle and can be used in much the same way.

Another unique looking mushroom that grows in often sizeable clumps from decaying wood is the bear’s head tooth fungus. This time though, instead of looking like cauliflower or brains, this mushroom resembles an array of tiny white icicles hanging down from a series of branches.

The only lookalikes for this mushroom, like the lion’s mane, are actually edible members of the same family.

The bear’s head has a slight taste of seafood, so it is often used as a replacement or supplement for seafood in dishes, including a crab-free “crab” cake. It is also very good in stir-fries, but it should be used as soon as possible because the flavor will start to break down faster than in other mushrooms.

This list of edible mushrooms is just a portion of what’s out there, but we hope it helps you get out to explore the outdoors near you and make use of some great all-natural foods for the dinner table. There are also numerous options for cooking with each one of these mushrooms, so there could be something to please even the finickiest eaters. Good luck and stay safe in your foraging!